Darkest Secrets Beyond The Keyhole by Rosalyn Richardson 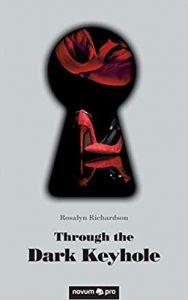 As Greg drove through the pretty little village of Broughton, I noticed a small shop and post office with a few surrounding cottages.

Greg drove his Cayman Porsche up the lane and through the open gates towards the magnificent building they, or at least I was going to survey. He slowly glided across the sweeping gravel to the car park at the front of the building.

I then stood and looked in awe as my eyes gazed at the vista before me.

The Georgian Mansion, which had apparently been vacant for some time, had been recently converted into six luxury flats. The grounds exuded beautifully kept colourful gardens, and the mansion itself, were apparently owned by the Earl of Hampton.

The scenery was breath taking. All around, as far as the eye could see, were green velvet pastures and rolling countryside. The view of the downs. The tall spire of the nearby Winchester Cathedral could be seen in the distance of the picturesque surroundings that engulfed “Marten Manor”.

Greg and I had recently divorced. We stood together on the pebbled drive beyond the electric gates. We waited for Brian Worsley, the local representative from Coe Midgely and Bates, estate agents in Winchester. Greg Whitely had driven down from his offices in Ryedale, North Yorkshire to Broughton with me to look at one of the apartments, namely the show apartment, if, which I decided to take, would be as part of our divorce settlement.

Greg had left his Ukrainian partner up in Yorkshire for the day, but that is a story that will soon unfold!

Mr Worsley soon arrived. He parked his Mercedes Benz near to the impressive wildlife pond which was situated beside an impressive water fountain.

Mr Worsley greeted us both and we were invited in to accompany him to the Manor House. The front door was of heavy oak wood. The marble floor in the entrance sparkled and glinted with the sun shining through the narrow stain glassed window.

As we walked through the entrance, you could see in the middle of the reception area was a large sweeping staircase with a period wooden handrail. The stairs were decked with a pale green Axminster, or similar quality, thick pile carpet.

“Well,” Mr Worsley began, “I’ll just give you a summary of the Manor. The top three apartments are occupied and downstairs, one of the apartments is occupied but this first one here, as I know you are already aware, is the “show house apartment as it were” is now ready for sale”.

Mr Worsley directed his left hand towards the front door of the apartment.

“As you might expect, with this being the show home, it is decorated and does contain some fixtures and fittings and is at a discount price with it being the last one to be on the market at present”.

Mr Worsley unlocked the door and opened it, saying,
“I’ll leave you to look round at your leisure. I’ll be in my car. I’ve a few calls to make. Enjoy your perusal and I will see shortly”

He beamed at us both before he turned and walked away. His small frame and immaculately dressed person in a crisp grey suit, white shirt, and ruby red tie, finished off with expensive leather brogues, certainly were a good representation of the estate agents.

Greg and I hardly spoke to each as I toured round the apartment, mind you, he hadn’t really spoken to me all the way down, so I put my earphones in and listened to the latest novel on my iPad.

It was very tastefully decorated. A large en-suite bedroom and then directly opposite it, a much smaller bedroom with a small bathroom next to it. “Obviously not made for families” I deduced.

The lounge was perfect. My eyes were immediately drawn to the wood burner set in an exquisite marble hearth. I turned to Greg and my eyes lit up excitedly “Look, exactly what I’ve wanted for ages – a real fire!”

Greg was sat on the armchair which formed part of the two-piece suite. It was a pale grey, or as I had noticed from the description, “Medusa Silver” and a two-seater settee with matching cushions.

I took my high heels off before stepping across the period wooden flooring and made my way to the rear of the living room.

I could see the French doors looking out to the back of the apartment, beyond which was wooden decking and an open garden which then overlooked the Mansion grounds.

There were rows and rows of fir trees and mature woodland around the parameters of the estate. Beyond that a row of Leylandii trees could be seen.

By habit, I gave a slight giggle to myself as I recalled that every time Greg and I, in the past had seen those trees, they had always grown in straight lines next to each other and had been planted in long rows. Greg would get me to count how many there were in any one line, sometimes as many or few as 24. Greg would then say with a grin that he could name each tree after each woman he had slept with, and he could! I thought it was a bit of a wind up or a wheeze on Greg’s part, only it wasn’t.

I laughed at the time thinking it was a bit of a game. It reminded me of the “Four Weddings and a Funeral” when Andie McDowell was naming each man, she had ever had sex with and what it was like, how she rated each one. I do believe that her list was over twenty, but at the end of the day that was just a film, this joke was the same, wasn’t it? I later found out that it wasn’t a joke at all!

I let out a huge sigh and made my brain focus on the present, not the past.

A large, beautifully maintained rockery was situated at one side. Everywhere was pure unadulterated beauty, “unlike Olena” I thought sarcastically to myself.

I then made my way upstairs to inspect the rest of the apartment.

The master bedroom was at the back of the apartment. It had an en suite shower room and built-in wooden wardrobes. The sash windows complimented the room and gave ample sight of the beauty of the surroundings.

Greg sat entirely engrossed, focusing on his laptop. I felt my blood begin to rise at first as a thought passed through my mind, “He’s probably emailing “blondie” or as he now had promoted Olena to the title of “Super Tart”. He was probably watching her latest pose. I had now seen everything that day, apart from everything else, the height of ecstasy as she climaxed her loud orgasm with his appendage in her mouth. I now tried to always make sarcastic remarks to counteract my grief and resentment,

Before we parted on that fateful day in his office, I had quite by accident stumbled across a calendar that was on Greg’s hard drive. He had been photographing Olena for each month of the year with different poses. One month had Olena with a plastic warning sign between her legs that read, “Warning Toxic Levels”, her tiny breasts thrust forward and her hands behind her head over her short spikey blonde hair, and slowly and enticing sexually licking her lips heavily laden with red lipstick. Then he photographed her posing with a picture of me and a sign underneath from the workshop that read, “Needs restoring so half price”.

At one time it would have cut me to the core, but even I could see the funny side now and my bitterness and anger were now rapidly waning. I had confronted Greg about it, not just the actual photos of this blonde tart but the familiar surroundings where she seemed to be posing.

The one where she was posing with the fire extinguisher, behind her looked like our glass fronted cabinet with our office crockery in that we used for when our visitors came to the office and refreshments were made for them.

Then there was the heavy-duty large banker’s desk where she was laid out on completely naked, and had her wrists and ankles tied together, wasn’t that ours up at work?

Greg must have quickly thought up and anecdote or I must have been stupidly naïve when he said that it was just a bit of fun and that he had superimposed the photos that he had downloaded from the internet lyingly telling me that he didn’t know who she was. Greg said it was only like calendars those garages, and workshops used to have hung up for all men to see.

I wasn’t totally convinced but I didn’t want to believe anything other than what he told me.

I remember saying when I was looking at the one with her face down on the table:

“She could do with washing her feet, their black and she can’t be a spring chicken, can you see those varicose veins running down both her legs!”

A few days later curiosity had got the better of me and I tried to look again to see if the calendar was still on there, but Greg had changed the password. That should have rung alarm bells, but I didn’t want to face it, after all Greg at that time was just the same old person.

I hadn’t seen “Olena “at this time and hard as it was, I desperately put it to the back of my mind and trusted Greg. After all men had to have their dreams and excitement – didn’t they!!

I gave an exasperated sigh as Greg suddenly looked up expressionless.

I chose to ignore that comment and moved on to view the kitchen. I felt that childlike rush of excitement as my eyes cast on the large kitchen range, which had also been on my wish list, surrounded by plenty of stone worktops.

There was a decent sized American style fridge with an outside temperature gauge and a drinks dispenser. Next to the sink unit was a washer dryer accompanied by a dishwasher next to it.

I stepped back into the lounge and Gregg was still glued to his computer.

“I’ll have it” I declared confidently.

Mr Worsley at that point came back, still sporting his beaming smile, and I immediately gave him my decision.

All the official paperwork was arranged to be completed.

Mr Worsley turned happily to me and reassuringly said, “You won’t regret it, you’ll soon settle, and you have some fine neighbours”. Little did Mr Worsley know what or how my fate would steer me through some of the most challenging tapestry of my new life here in Hampshire.

Firstly though, I will go back to my childhood and how I eventually ended up moving miles away from North to South, in this new apartment and what terrible challenges I was still to face.