Murders By A Deadly Silk by Rosalyn Richardson 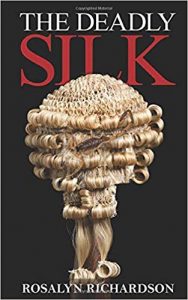 I am 25 years old, and I have worked for Lewis, Carrington, and Hamlyn Solicitors as a legal secretary since I was 18.

Emmy and I had met at secondary school and had both gone on to study at college. I studied business and administration. Emmy had lived with her family in Surbiton, a few miles out of Kingston and I had grown up in Woking in Surrey.

Emmy and I kept in regular contact after leaving college and we would regularly meet up for nights out. I was still at home, but Emmy told me she was moving to Kingston to live in a rented flat with her boyfriend Alexander, or Al as he preferred to be called.

Emmy worked as a reporter for a well know London newspaper, but Al, I never really did find out what he did, if he did anything!

Not surprisingly it didn’t work out for them, and Emmy kicked him out. It was shortly after that while Emmy and I were having a coffee together one Saturday that she told me that she couldn’t afford to keep the flat on her own and, so she was advertising for a house mate. That’s how she and ended up with me!

Yes, I did have a boyfriend called Richie, but we didn’t live together in fact perish the thought, bless him.

Lewis Carrington and Hamlyn were based in West London, I have the daily hustle and bustle of catching the tube each morning. It was like being in a sardine can, and it is a chance of luck which tube a person can manage to cram in to.

In Hammerton Row, where I am based, much of the Public-Sector establishments are sectioned together, i.e., the banks are all in one section, building societies in another and then we also are sandwiched in a line of Solicitors and legal companies. It’s like a village in itself!

Even though I have worked here some years, I still don’t know everyone by name for various reasons but mainly because I am based on the second floor and do not generally see anyone outside my own team. The relevance of this statement will become clearer as my story unfolds.

My manager is Mrs Lauren Bakewell, and is in her early forties. Her senior is Mrs Samantha Gerrard a family law solicitor related to one of the partners, Angus Hamilton.

Mrs Bakewell is married with two children a boy, and a girl. She is tall and slender with shoulder length silky looking blond hair and not one out of place as the saying goes and with piercing green eyes.

I started my contract of employment there almost the same week as she did. I remember her arriving in the car park, as I watched out of the office kitchen window. Mrs Bakewell carefully reversed her Audi TT in to her parking space. I read her private registration plate, LB22.

I never did know what the 22 stood for!

I sighed momentarily in a wistful fashion. Life seemed so perfect for her, even her husband when I met him at the office one evening as we were all leaving, added to this fairy tale life that I imagined she had. Christian, or Mr Bakewell, was tall and dark haired donned in an expensive looking suit.

Not that my life was drab by any means, but I often mused where my life would be in a few years, and if I would be another Mrs Bakewell so to speak.

I had made good friends with Martine, who was Mrs Wood’s legal secretary.

Emmy never seemed to mind Richie coming around, but he didn’t often stop overnight, but I would stop over at his place where he lived with his mum, and that I think tells the tale about our relationship.

As far as I knew, we were just there for each other and good friends more than anything, but nothing heavy as it were.

We had been “together” for around 18 months now. Richie was a woman’s dream. He was very attentive, lovable, and affectionate with a cracking sense of humour. That was it though. He was dependable, very rarely lost his temper – well not in front of me anyway. He was a loving son who was obviously adored. We had “loosely” talked of getting engaged, but it was always me who changed the subject. I longed for that bit of spice and excitement in a man. A man that had Richie’s qualities but had that enigma side to him and unpredictable.

I had begun to feel that we were more like brother and sister, and our sexual life, if you could call it that, had just fizzled out. That was fine by me and didn’t seem to bother Richie, but he kept trying to force my hand into marriage. He was ever the optimistic, that we would work it out eventually and we just needed to be together. Perhaps that was the problem, he was getting needy. Gradually, we grew apart.

Richie and I stayed good friends and kept in touch now and again. Later I would learn how much I needed him and his protection.